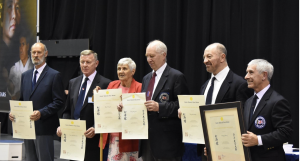 The KUGB is deeply saddened to announce the death of Sensei Dot Naylor (3rd Dan). Dot passed away peacefully on the evening of March 7th in the company of her daughter, Jane. Dot had suffered a long battle with Dementia, which she fought with great courage and determination.

Dot began her lifelong love of Karate in 1965 at the Red Triangle Dojo and was the very first woman to train at Karate in Liverpool; she also took her first Kyu grading with Sensei Enoeda in July 1966 and her first Dan grade in 1970. As a member since the KUGB’s formation in 1966, along with her husband Charlie, she coached many students to Black belt— some of whom went on to become national and international champions. In particular, she loved teaching the children at her Dojo in Chelmsford. Her passion for Karate continued and in recent years she found great joy in watching competition videos and demonstrations.

Her contribution to Karate was recognised by the Prime Minister in 2015 when she received a Point of Light Award. We send our sincere condolences to her children Jane and Mark and their families.

Dot is pictured here as the only woman in the group who received the first 50th Long Standing Member certificates in 2016.

Goodbye and Rest in Peace Dot.