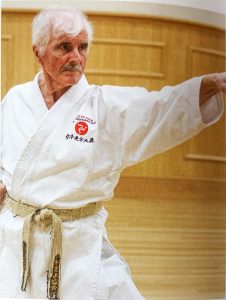 John started training on the Isle of Man in 1967 when the first Karate Club opened on the Island.  This club was not affiliated to a major UK association and eventually John and a fellow Karateka decided there might be more to Karate than they were being taught.

They heard about a KUGB Black and Brown belt course taking place in Nottingham and traveled there with the intention of training, not realising that they would need to be kUGB members.  They were allowed to train, given that they had traveled so far, and were impressed enough to decide to join the KUGB.  In 1973 they set up their own Club and affiliated to the KUGB.

Sensei Sherry came to the Island to assess the standard and he gave the members a very tough session, with guidance on what they had to aim for.  Since then they have had Sensei Poynton three times a year for coursees and gradings.

With such inspirational Instructors, John and his fellow founder Instructor, Stan Hall, achieved their KUGB Shodan under Sensei Enoeda in March 1975.  John went on to pass Nidan in 1978 with Sensei Enoeda and Sensei Sherry, Sandan in 1998, Yondan in 2003 and Godan in 2010.

In 2013 the Club celebrated its 40th year by inviting Sensei Sherry and Sensei Poynton for a special course and grading which, as a special concession, included a Dan Grading.  2017 was the Club’s 45th year.  During this period it produced over 100 Black Belts and is by far the Island’s larges and longest established Martial Arts Club.

John gets a great deal of pleasure in teaching students of all levels and achieving his own Dan grades including his 6th Dan in March 2019.  All of his success is, in his opinion, a credit to Sensei Bob Poynton’s teaching. 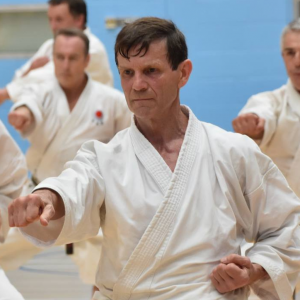 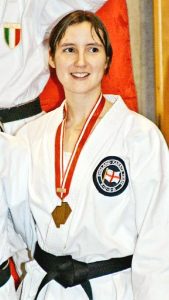