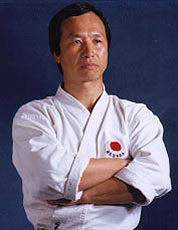 The following profile on Sensei Enoeda is a brief account of how he first became associated with the KUGB, and his feelings for the country that was his home for almost 30 years.

Sensei Enoeda was born in Kyushu, an island in the South of Japan, on July 4th 1935. A strong and natural athlete, he initially took up baseball, kendo, and judo, as did many of his contemporaries – these being the popular sports in Japan at that time. He proved particularly adept at Judo, and by the age of 16 he had reached 2nd Dan. However, as is often the way, fate guided him to a demonstration by two top Karate exponents from the famous Takashoku University. The two Karateka, Senseis Irea and Okazaki, so impressed him, that there and then, he decided to channel his energy into Karate.

He enrolled at Takashoku University, joined the Karate section, and within two years was the proud holder of Shodan. Another two years found him Club Captain.

One his teachers was the great Master and founder of modern Shotokan Karate, Funakoshi Gichin, whose instruction and advice was a source of great inspiration to him.

He graduated with a degree in economics before joining the JKA instructors class which he attended for three years, during which time his main instructor was Sensei Nakayama. He also trained with many other top instructors of the day. It was this quality of instruction, combined with a fiercesome determination, which moulded Sensei Enoeda into one of Japan’s finest ever competitors and instructors.

After achieving his aim of becoming JKA Champion, Sensei began to receive invitations to instruct in various countries – Indonesia, South Africa, Hawaii – and eventually joined his friend, Hirokazu Kanazawa, to instruct in England.

So it was, that in 1965, Sensei Enoeda found himself in a place called Liverpool, where he was to spend some considerable time. He had a flat in Percy Street, in Liverpool City Centre, close to the Anglican Cathedral, and his transport was a bright orange Volkswagen Beetle.

He was instructing full-time at the Liverpool Red Triangle Dojo, and the quality of instruction and the spirit he engendered was soon to bring the club competition success. If you were there in those early days, you would have found it difficult not to be inspired by the intensity of his coaching. No less inspirational was the intensity of his training – every morning at 7am in Sefton Park he would meet with a small group of students and train with them, showing by example that even All-Japan champions need to make training part of the daily lives. These students included Andy Sherry, Terry O’Neil, Bob Poynton, and Bill Christall.

Thus, Sensei’s ‘way’ has permeated through to KUGB club Instructors and to the current generation of Junior and Senior Squad members, and goes a long way to explaining the high standards of Karate within the KUGB.

When he went to Australia for the World JKA Championships in 1989, he would have the British Squad out training every morning at 7am. Sensei would talk about how his life had changed since he had left Japan to teach in England in 1966. He confessed that he had worried about the changes he would have to face – both in culture and climate – something he had not experienced so much when, for example, he was teaching in Hawaii. The climate there is similar to the Summer months of Japan, and there is a long established Japanese community.

At first he found English food strange – he could not believe we make a pudding from rice! – and the British weather! What did emerge from the conversation however was that he had grown to love the British people and their culture, and that he was so proud to be Chief Instructor to the KUGB.

He was once asked was he getting used to British food and he replied ”of course! I feel that now I AM British!”.

Sensei married in England in 1969, and lived in Kingston, Surrey, with his wife Reiko. His two children, Daisuke and Maya have both graduated from university and are working in England.

Sadly Sensei passed away on 29th March 2003 after a short illness, he was an exceptionally inspirational instructor with a larger than life personality and is greatly missed by his students and friends in the KUGB. We honour him as one of the worlds great Karate Masters and thank him for his invaluable contribution to the organization.

Sensei lived as an English gentleman, whilst developing the KUGB and on his behalf we will continue to work to make the KUGB even stronger.

Sensei would have it no other way. 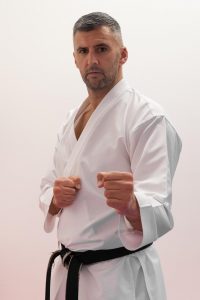 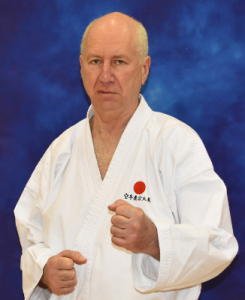