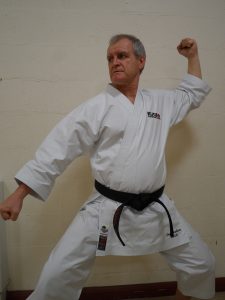 David (Dave) Graham was born on 14th July 1954, Lennoxtown near Glasgow. Scotland. At the age of 10 he moved to Basingstoke, Hampshire because of his Father’s work. While growing up he tried most sports, football, running, table tennis etc. and through dedication achieved an average standard.

In May 1973 Dave spotted an advert in the local paper for a new karate club (Basingstoke SKC) opening at the sports centre and was one of a hundred who attended the first lesson run by Sensei Mick Pike (2nd Dan) who originated from Portsmouth SKC, one of the largest KUGB clubs in the South of England run by Sensei Phil Elliott and Mick Dewey.

The connection with Portsmouth was to prove very important and influential within the first 8 years of Dave’s karate life introducing him to Sensei Enoeda who held gradings there and training sessions under other Sensei’s, Mervyn O’Donnell, Dave Hinks and Dave Hazzard.

In 1974 during the Bruce Lee boom, Basingstoke SKC membership reached 180. Luckily training in the sports centre cricket gallery enabled the lesson to be split into 3 groups (beginners, middle grades and high grades) and so Dave, a purple belt at the time, had his first taste of teaching lower grades.

Early gradings at Basingstoke were held by Sensei Ray Fuller until 1976 when Sensei Pike left the club in the hands of Dave and 3 other 1st kyu brown belts (at a later date with assistance from Sensei Phil Reed (3rd Dan) from Guildford). A change of grading examiner then took place and that was the start of a long relationship with Sensei Enoeda, who took the majority of the club gradings until 2001.

This was another influential moment in Dave’s karate life to have instruction from Sensei Enoeda on a regular basis and to get to know him as a person. One of Dave’s favourite memories of Sensei was how he would get 100% commitment from you and just when you had no more to give, he would drop his persona for a few seconds, make a small joke or witty remark which seem to lift you and then went back to a hard training session. Meeting Sensei opened up a whole new karate world to Dave (remembering there was no internet or mobile phones in those days and all communication was done by letter or word of mouth from the club instructor), he started to train at other club gradings that Sensei held, Marshall Street (Sensei’s club), Black and Brown belts courses and until 2003 (just before Sensei’s death) attended his twice yearly Crystal Palace courses where Dave achieved his 1st Dan (1978) through to 5th Dan (2000) Black Belt, training under top Japanese Sensei’s Nakayama, Kase and Shirai to name a few.

Dave was very upset at Sensei’s death as he had not only lost one of the best karate instructors in the world but a mentor and friend, he has commented that Sensei’s spirit and presence was so strong that it is very easy to imagine he is in the dojo with him when training.

In 1993 Dave was appointed Southern Region Treasurer and being a regional officer his karate life was now on a national level, bringing him into regular contact with Sensei Dave Collacott, Southern Region Chairman and nationally, Sensei’s Andy Sherry, Bob Poynton, Derek Langham, Charles Naylor and Frank Brennan. This led to him travelling further afield to train under the above Sensei’s along with other Sensei’s Terry O’Neil, Bob Rhodes, Billy Higgins, Jimmy Brennan and Garry Harford at club, regional and national events, including Torbay and Lancaster residential week long training courses.

Dave achieved his 6th Dan at Bath University on the 6th October 2012 and dedicates this to his family for their support, along with Sensei Enoeda, Sensei Sherry and Senior KUGB Instructors for their very high standard of karate, their instruction, dedication and attitude which has given him the inspiration to succeed within karate and to mould him as a person.

Having trained for almost 50 years, Dave can’t think of any reason to stop now and hopes to emulate his peers by passing on and maintaining the KUGB high standard of traditional Shotokan Karate. 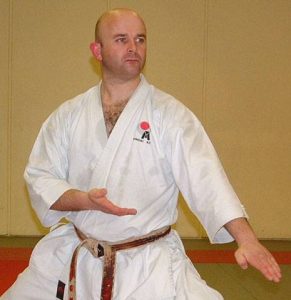 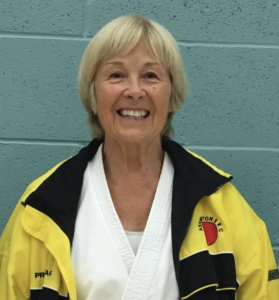