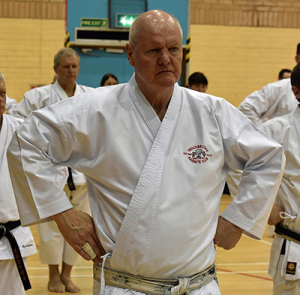 Mike was born within the City Walls of Chester on the 23rd June 1950, making him a Cestrian, a citizen of Chester. Along with all the special privileges that this brings Mike felt he has been very privileged in his Martial Arts life.

He started Judo at the age of 11, training twice a week under 3rd Dan Miriam Thomas in Deeside, a half hour train ride and mile walk from the station, but he felt well worth it. He also trained with Sensei Osaka of the KNK and Sensei Higgashi, a Ju Jitsu and Iai instructor who also taught him many rare sword drawing techniques.

In 1965 Mike found a new Dojo, Handbridge BJA, and from 1967 to 1969 Mike taught Judo at Chester College. His introduction to Karate occurred in this period when two Karateka, Geoff Wilding and Mike Cotgreave, asked to share his dojo and friendships grew as Karate and Judo techniques were exchanged. When new Judo mats were needed, Geoff suggested training in Karate whilst saving for their purchase. However, the Judo club soon gave up hope of raising the required £400 and so on the 4th May 1969, Handbridge Shotokan Karate Club was established by Sensei Geoff Wilding as a totally non-profit making club.

Mike spent his initial years chasing the coveted Black Belt, eventually passing under Sensei Enoeda, who presented Mike with his own spare Black Belt; now threadbare it remains at home as his treasured possession. That was the start of a special friendship with Sensei Enoeda, that lasted right up to Sensei’s death with many one-to-one classes at the Handbridge Dojo.

Always keen on weapons, Mike found an ally in Sensei Kase with whom he also had private lessons, particularly on the relevance of weapons to Kata and link between the three tekki kata. In 1980, he was privileged to have private training with Masatoshi Nakayama who inscribed his book as ‘Sensei Enoeda’s Strong Student’ – both Sensei Enoeda and Sensei Nakayama signed all of Mike’s Karate Books.

He became a KUGB Judge in 1976 and a KUGB referee in 1979 and continued with his love of refereeing, becoming an EKB referee in 1986.

Having not graded for 13 years Mike tried for 4th Dan with Sensei Enoeda only to fail on Kata. He soon returned to morning training at the famous Red Triangle in preparation for the retake, and was this time successful. When he prepared for his 5th Dan he went regularly to the morning classes at the Red Triangle and his seniors, Andy Sherry, Terry O’Neill, Bob Poynton and Frank Brennan all gave him great help and encouragement and he passed this grading first time, with Sensei Enoeda commenting that he had obviously trained very hard in preparation.

Mike has admitted that his sadness at Sensei Enoeda’s death in 2003 remains deep and was compounded by the death of life-long friend Sensei Geoff Wilding in 2008. He feels however that both of them would be delighted to see him receive the Griffin Award to the Community for 40 years of running a non-profit making club and additionally, with the help of Sensei Brennan and the Red Triangle morning classes pass his 6th Dan under Hanshi Sherry in 2009.  At the 2018 KUGB National Championships, Mike was awarded his 7th Dan by KUGB Chairman, Hanshi Andy Sherry.

Mike continues to be both an active referee and Instructor and is happy in the knowledge that the KUGB continues its high standard of development of perfection of the character of its members under the guidance of Hanshi Sherry and the Technical Committee.

As well as teaching at his own Club, Mike now teaches Internationally in Germany, France, and California USA. 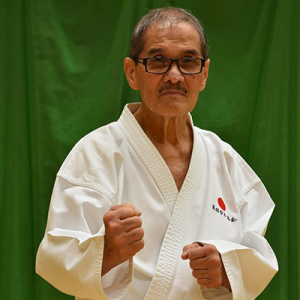 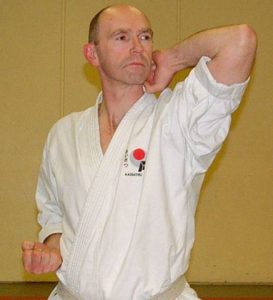