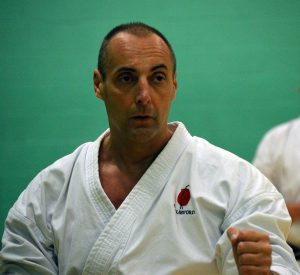 Richard first started training in Karate in 1985 when at Thames Polytechnic in Woolwich. In early 1986 he moved to Chelmsford, to do his work placement with Marconi, and joined Chelmsford Karate Club under Sensei Charles Naylor.

In his first year with the KUGB he went on the Lancaster Course which he describes as “excellent and a real eye-opener”, regraded to a KUGB Yellow Belt, entered his first competition, came joint third in the Kumite at the National Students Championship, and won a Kata event at the Ipswich Championships.

The events of 1986 really fired his enthusiasm to study and develop his karate, laying the foundation for the years ahead.

Richard successfully passed his Black Belt under Sensei Enoeda in December 1988, over the years he has continued to progress and achieved his sixth Dan in 2021.

For 20 years, Richard competed regularly at both Regional and National level and was a member of the Welsh National Squad. He competed successfully in both Kata and Kumite events and his highlight was as a member of the Chelmsford team that won the Team Kata in the 1998 KUGB National Championships.

In a bid to gain more knowledge and increase his understanding of Karate, Richard has attended numerous residential courses over the years – Lancaster, Torbay & Crystal Palace, Special Dan Grade Courses, Instructor Courses, and many Black/Brown Belt courses. This has presented him with the opportunity to train under many great Karate masters.

As a student of Sensei Charles Naylor, Richard had the opportunity to learn and develop his coaching skills. In 1989, he took responsibility for one of Sensei Naylor’s Dojos and would often teach at the main Chelmsford Dojo when Sensei Naylor was away traveling on KUGB duties. When time permitted, he would often travel with Sensei Naylor to clubs around the country. As a result, Richard qualified as a National Instructor in 1996 under his guidance. Subsequently, in 2005, he was appointed a KUGB Assessor and continues to fulfill this role as a KUGB Senior Assessor.

Richard has been actively involved over the many years in the development of numerous students who have gone on to pass their Dan Grades, be successful at competition both at National and International level, based on high technical standards of Karate and etiquette.

Richard qualified as a National Referee in 1992 and regularly attends all the major KUGB Championships.

In February 2015 Richard, along with his wife Jane, was appointed to the Karate Union of Great Britain’s Executive Committee in the role of Publicity and Promotions Officer.

Then in March 2015 he was elected as the KUGB’s Southern Region Secretary. Also in 2015, Richard was appointed as the Mental Charter Advocate for the English Karate Council (EKC) and attended the launch of the Mental Health Charter for Sport and Recreation meeting Nick Clegg, Deputy Prime Minister. Later that year, Richard attended Parliament to speak about the benefits of Karate for Mental Health and has represented the KUGB at subsequent All Party-Political Group meetings. As a result, in 2016 he was appointed as the KUGB’s Disability Officer by the Executive Committee. In 2019 Richard was elected as the KUGB’s Southern Region Chair and in 2020 became the KUGB’s Finance Officer.

On the International Stage Richard is the Assistant Publicity Officer for the European Shotokan Karate Association (ESKA) and the World Shotokan Karate Association (WSKA). He regularly attends their Championships which allows him to build also on his technical knowledge and understanding observing Karateka of the highest standard at close quarters. 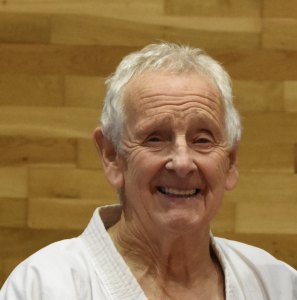 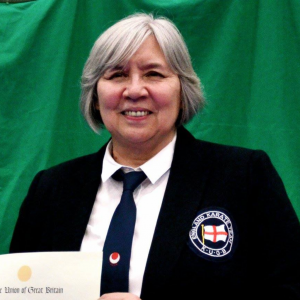